The example code referenced on this page can be found in the directory /shared/eresearch/pbs_job_examples/profiling.
Copy this directory into your own directory.

You might have some Python code that is running a bit slow and you would like to know if there are specific parts of the code that are responsible for its slowness. You might add some timing information to the code like this:

and when you run it you get the timing information:

This approach of inserting timing statements throughout your code rapidy becomes a pain when you have lots of functions and several hundred lines or more of code. In fact it’s downright slow and unmanagable. A much better approach is to use the Python profiling tools like Python Call Graph and cProfile.

Using the command line is simple:

Alternatively you can call the pycallgraph module from within your code:

In both cases an image pycallgraph.png will be created. Copy it back to your local machine to view it. Each function that is entered into will be shown as a box, with the number of calls to that function and the total time spent in that function. Functions that took the most time will be coloured red. Below is the function call graph for the simple primes.py program. 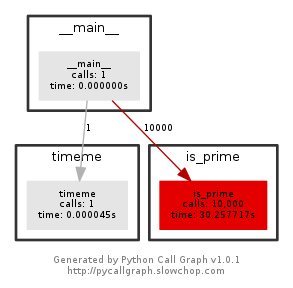 An example of a call graph for a more complex program is here. The code was from a research student and it was running on the eResearch HPC. This clearly shows that just one function is responsible for most of the time that the program takes. Read the documentation for pycallgraph to find out how to specify the output filename and other options like filtering of what functions to profile.

If you want more detailed information on your programs performance then use cProfile. Using the cProfile module will output the raw profiling data to the screen, however we want it in a file so we use the “-o” option.

This will create a binary data file profile.dat so you can’t just view the data in there like a plain text file. You will need to write a short python which uses the python module pstats to analyse the data. See the small example program show_pstats.py.

The show_pstats.py program loads the binary data file and prints the data that it contains sorted by time using just the two lines:

This is custom footer